The above article is about a volcano that is getting a bit jittery in Japan.What actually struck me apart from the volcano was the above comment of a reader.Sincerely, will the Global Warmers tells us how they will charge Gd for the carbon emissions emitted by volcanoes?? This just shows man’s disdain and ineptitude in realizing that Global Warming is not the reason why the world is dying off-it is sin and wickedness.

Actually you cannot blame Global Warmers .They have been brain washed by evolution and worship Science and Technology which, despite all its advancements, still does not know how the world came into existence .Interesting, for a world full of knowledgeable scientists! The Pyramids and Tower of Babel were architectural advancements, the Iron hoes and Weapons were great artistry ,yet Egypt received plagues that devastated it, Sodom and Gomorrah was turned into salt pits ..yet they had no computers or fuel guzzlers !!

So as Nature continues to convulse more and more I really wonder what Global Warming Inc. will tell the world and how they will charge God for carbon emissions because from what we are seeing , these natural calamities have recently gained and will continue to gain the biblical proportion status..From South Africa to Australia to Russia to Pakistan and soon Europe. 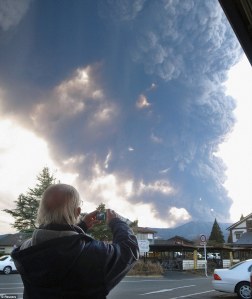 GOD EXPRESSES HIS JUDGMENT THROUGH NATURE

The Bible is clear that God lets the mountains smoke and melt , he orders the waves to roar and the floods to run over the land, he allows locust to swarm farms on earth.

It is even more clear that in the last days, that nature shall undergo through convulsions and devastation.All of this is happening to show man how God hates sin and why God send Jesus to save man from sin ,hence calling all men to repent.

Yet, like Pharaoh whose heart hardened despite the judgments of God, many are hardening their heart with Global Warming, Overpopulation, Manufactured events, Mother Earth .

These things are happening as warning calls for all to trust in the LOrd in these days of judgemnt.Let us not hraden our heats but return to the Lord.

When a child is born there is joy because there is life, but when one dies there is sorrow because of death .THat is why there will be no sorrow in heaven because death came because of sin but Jesus comes to give life.YEt the last days shall be days of sorrws because death will be plentiful.

By Arthur Owiti
Just this year alone many have died .The Haiti Cholera outbreak is aid to have claimed 2000 lives.That is a big number.The Pakistan floods took so many.This is juts as Jesus prophesied of the last days .Days of sorrow means days of torment and death,

And whosoever liveth and believeth in me shall never die. Believest thou this? John 11: 26

Believers in Jesus should not forget that we never die . Yet in these last days one thing that will engulf the society is death.It is so strange how many are concerned about the one child policy and reducing people.We complain about traffic jams and over congestion which reduces the quality of services.All these are given as reasons for depopulation.

However the book of revelation reveals how depopulation will be exist at the same time no depopulation.

First we will see the Antichrist depopulation of the church, which believer know is vain because we don not die but have eternal life through Jesus Christ..The number of death penalties for Christians in Muslim counties and others is increasing by the day.Remember them in prayer.
Many believers will die due to persecution and murder and beheading by the Antichrist government after being betrayed to the authorities.

However one form of death in the the End time prophecies that will affect both believers and non believers are :

Now for those who are trapped in the False Green Gospel that seeks to preserve the environment, will you take God to court because not only will people die but also the vegetation and the environment

SO death to the environment which includes man …Why ?

Remember , before sin came to the world everything was good. But when SIN CAME by man the creation also started dying.

One brother told me how he thinks Adam had the saddest death why ?? HE lived for 930 years. He saw when the world was very good and very evil because of his sin.And after his death 100 years or so later, God destroyed the earth with a flood because of SIN.

In these last days we see sin increasing day by day both in the church and the world. Yet people forget what God did about this.

Just as God judged the world in Noah’s time he will judge it again as he saves his own.Why?

The reason why God’s creation was good was because he is good. Since he is good his creation and his possessions should be good.That is why he judges the earth which is stained by sin which is bad when God the creator of the earth is good.

THAT IS WHY HE GIVES POWER TO THE KINGS OF THE EARTH BUT HE DOES NOT CALL THEIR KINGDOMS HIS KINGDOM BECAUSE THEY ARE NOT GOOD AND HE IS GOOD.

Yet if they are good why is the world still sick ?? WEa re to wait for the good God who will set up his kingdom of good things for those who believe in him.

Otherwise endure to the end and stay in the faith of Jesus Christ whether death of persecution or natural disasters overtake you for we do not die but live in Him.