The so called Mobile Phone Banking failed to pick up in South Africa despite its roaring glory in Kenya .This is just because most South Africans who are concerned about banking and business already have e-accounts through visa cards with their banks .They do not need to go through another bank to get the same services .However in Kenya most people are not in the books of the banks so Safaricom Mpesa draws them in.

This shows you that South Africa is far developed via banking while Kenya is still trailing behind South Africa.

However it is wrong for Kenya to duplicate banking services by offering the services that are already being provided in South Africa  .If you have visa card why must you have a mobile phone that acts like an electronic card ? Greed.

Meanwhile, the so called Mobile Phone Registration is a Trojan Horse claiming security measures when it is actually fueling profits for  mobile phone banking.

When it comes to money ,the only institution that is to have all your details apart from the Government is the bank .

However M-pesa  has created a new chapter in the history of banking privacy that should not be allowed to exist .

But Today’s E- Technology  is killing privacy in the name of security when such technology will never solve crime and insecurity.

The hypocrisy is seen with how Kenya has dealt with the Mobile Phone Registration Decree .If it is true that mobile phone registration enhance security , why is they have not switched off unregistered phones?

It is because if they switch off they will lose profits. This shows you they care more about profits than a security thus any claim of security and aims of curbing crime go down the toilet as Trojan horses.

Technology is not a Savior, it is a system and every system or world has its criminals and saints ,Crimes will still be committed and actually more sophisticated ones.

Mobile money platform M-Pesa has failed to live up to Vodacom’s expectations for the product in South Africa (SA), Pieter Uys, the group’s CEO, has admitted.

Vodacom has registered “more than” 100 000 M-Pesa users in SA since its launch in August 2010, but says this has fallen short of its expectations for the product. When it unveiled the product last year, Vodacom said it expected to sign up 10m M-Pesa customers within three years — an ambitious target given that SA has a total unbanked population of 13m.

M-Pesa was pioneered by Safaricom, Vodacom’s sister company in Kenya, and has been launched in a number of African markets. It’s proved a big success in Kenya and Tanzania, where banking infrastructure is poorly developed.

In Tanzania, where the product was launched by Vodacom, M-Pesa has 1.6m active and 7m registered users. By last year, Safaricom had more than 10m M-Pesa users on its books.

“SA is a little different to Kenya and Tanzania,” says Vodacom Group CEO Pieter Uys. “The banking sector here is much more developed.”

He says he is “still a strong believer” that M-Pesa will make a “big difference” in SA, and adds that Vodacom is implementing changes to the product in the hope this will help it gain better traction in the market.

Uys hasn’t said what those changes will entail.

Vodacom launched M-Pesa in partnership with Nedbank. It’s understood it had been keen to get its own banking licence to offer the product but was discouraged from doing so by the Registrar of Banks.

LOYALISTS DEFECT AFRICAN UNION STANDS WITH GADDAFI … WHO IS FOOLING WHO ? 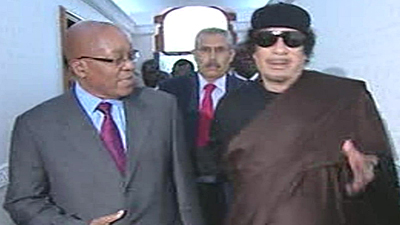 NWO PUPPETRY : President Zuma consoles Gaddafi like Judas consoled Jesus .... Gaddafi has been deserted by many of his senior officials who are in Rome singing" We Surrender All" courtesy SKY news

What is happening in  Libya is appalling and more disgust has been compounded by the AU visit of President  Zuma of South Africa. His meeting with Gaddafi is nothing but a meeting of  traitor.

Meanwhile about 100 senior officials of Gaddafi’s government have defected  clearly showing you that their loyalty to Gaddafi has a price : death.They cannot die for a man who is fearing to die.

Now with such developments, it would be strange for Zuma to claim he is trying to make peace when he cannot stay in Libya with Gaddafi to experience the bomb theater he is undergoing.This shows you the hypocritical loyalty the AU has towards Gaddafi.they are just faltering him but they know the game is over.

The meeting was a meeting of Judases/traitors.

If Gaddafi truly loved Libya he would leave power to preserve it from destruction. Already NATO has destroyed a significant part of Libya’s infrastructure which NATO countries have the economic might to rebuild without Gaddafi in power.

But as long as he is present , NATO will continue shelling the infrastructure of Libya to the detriment of the Libyan people.

So in short he is helping NATO do what he claims not to do against the Libyan people :DESTROY LIBYA from its developed status to under developed.

Anyway it has always been known that Gaddafi is an NWO puppet and I think he is part of the game plan but he is acting as if he is not .If he is killed then he has been rejected by the NWO plan but if they give him a safe exit like going to the Holly wood of Justice , The Hague,then we can conclude that it was a NWO game.Maybe it is because he thinks he has built Libya by his own sweat therefore if someone else is to rule Libya ,Gaddafi has no choice but go away with his belongings..the infrastructure.

It is only NWO Puppet Regimes South Africa and Uganda that have led AU delegations to Libya , of course since Gaddafi has massive interests in both countries  .AU has been busy lobbying for an AU ceasefire that is so myopic in interpreting the situation in Libya.

How can you broker peace when you are subjective ? The best Peace brokers are mediatory and not loyalists. In this case , the West is loyal to the rebels and AU is loyal to Gaddafi—Diplomatic Stalemate.

AU should have heard the grievances of the rebels objectively before reaching a decision. But since Gaddafi owns a third  of Africa in terms of financial assets they have to craft a peace deal that preserves those interests.

Secondly Zuma and Museveni want to look like friends of Gaddafi when they are actually praying for his down fall.

AU is a club of African Presidents that promise to protect one another until their own interests are under attack .They pretend to be loyal to one another when everyone is after preserving their selfish interests.

Both Zuma and Museveni  legally diminished the power of  Traditional Kingdoms in their countries with Zuma  outrightly banning the existence  of the young kingdoms while Museveni legislating the Kings Bill that bans kingdoms from receiving money from foreign donors. Why this action?

Gaddafi was busy funding the  traditional kingdoms without getting access through the heads of state .In short he was funding the opposition after being rejected to be the head of Africa.

In response the heads of state punished the kingdoms by employing their executive power to control their prowess.

So who is fooling who ? In the end this merry go round is destroying Libya at the advantage of the NOW who do not mind destroying and rebuilding what they have destroyed because they know he who builds the building , owns the building.